This was a hard one for me. I looked up a bunch of words beginning with X. I even consulted a Scrabble prompt but they all seemed a variation of Xylitol, Xanthium, or other pseudo-scientific sounding names that gave me no inspiration. I’m stumped, as I am “Xausted” but Blogging A-Z has been so much fun.

So I’m moving on. Back to Japan. If you are looking for a wonderful Japanese film that explores the world of the concubine, look no further than the 1950’production, Life of Oharu.

It stars the famous Kinuyo Tanaka in the title role who was considered the Bette Davis of Japan. The movie adapts Saikaku’s Life of an Amorous Woman, and opens on a down and out old woman. As she recounts her story, we see her as a young daughter of court nobles, a great beauty but through her own nature, spoils her rise through the ranks as a daimyo’s concubine by a life of pleasure and rebellion. 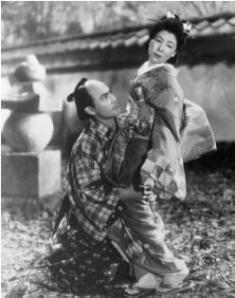 It is a cautionary tale of what can happen to the courtesan when beauty runs out in this world that prizes beauty above all else. It is Mizoguchi’s most important film that actually made him some money. Interestingly, the film almost never got made. It was a crazy idea. To bring a lush, historical, 17th century tale of a courtesan’s exploits when such dramas were forbidden by the American occupation. It had everything going against it. Accept passion.

The director wanted greatness and he reeled in his leading lady, Tanaka to stake their reputations on the film. It was like the Japanese Gone With the Wind. In this post-war austerity, the country had never seen anything like the drive and scope it took to get the picture made. The film went over budget and the critics complained that Oharu was being treated too sensitively. Both the director and his leading lady soon grew exhausted. 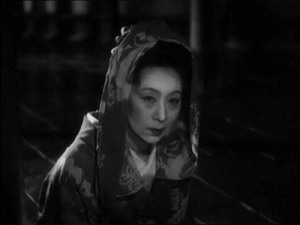 The film shut the critics down and won a major festival in Venice. There are so many moments to this film that are brilliant. The silent recognition when Oharu sees the son she gave up as a child on the road and a later glimpses him as a man. One of the most poignant moments-Oharu overhears an aged courtesan singing a tune, and she herself will sing this in the same circumstances as a mendicant nun, showing how difficult it is to escape one’s destiny.

I think you’ll like it. It’s very poignant. Thanks for stopping by!

What an interesting movie. I bet it resonates with some people.

Thanks Liz. It’s a fabulous movie. It used to be on YOUTUBE but I see they took it down.

I looked at scrabble words too! X was a difficult one, but you certainly turned it into something great. Love the story behind the film. Always learning something new here 🙂

Elsie, thanks it was unplanned because you’re right X is so darn hard!!