When an undead woman with serious de-comp issues stalks sixteen-year-old Lyla Grimm, her hope of rescuing her rock-bottom reputation takes a back seat. Especially once Lyla’s new talent of resurrecting the dead draws the attention of Eric, a Grim Reaper with a guitar and a chip on his shoulder.

While Lyla navigates the gossip-ridden halls, Eric works to gain her trust and discover why Death’s clients aren’t staying down. If she passes on her gift, his death-messenger destiny might be altered. But the closer he gets to Lyla, the less sure he is of his plan. The dead are way easier to deal with than the living.

A recipe and an excerpt
Lyla and Cassie appreciate good food and aren’t ones to hit the salad bar line in the school cafeteria. But as Lyla’s troubles begin to pile up, her appetite begins to suffer… which is a real shame. And Eric’s not been able to enjoy real food since his job began. They’re missing out.

Photo Credit: Flickr by @MARIA@
Excerpt from Chapter 28 :
Her straw wrapper refuses to tear off in flakes larger than two millimeters. “What are you doing here?” she asks, tearing off tiny pieces.
“Having lunch with you.”
“Why would you do that?”
“Once you understand my intentions, you’ll realize that I only want to protect you.” I point to her tray. “You should eat something.” Her blushes show up too easily. She looks tired and thin.
“I can’t.” She eyes the Salisbury steak on her tray and then slides it toward me. “You want it?”
I press my forefinger on the tray’s edge and scoot it back towards her before the smell becomes too clear. “No thanks.” For the first time, the food doesn’t look disgusting and the smell doesn’t bother me, but I might not be able to fake my reaction once I put a bite in my mouth. Repulsion is hard to hide.
“Why do you wear gloves all the time?” She looks at my hands resting on the table. “It’s not even that cold yet.”
“I like the way they feel. I have cold hands.” I watch her eyes as I speak, hoping she’s buying what I’m selling. I’d rather not confess why. My label is hard to live with. “So, what happened with the table of jocks before I walked in? I feel like I missed the main event.”
Her gaze drops to her tray. She rips off a corner of her napkin and rolls it into a tiny ball. “Nothing really. He was making comments about the missing bodies and my family.”
“That bothered you?”
Her expression crumbles when I say that. “Yeah. He was making fun of my family being twisted. I’m not ashamed of what my dad does. It’s a business. He and my mom treat the families who lose people with a lot of care and compassion.”
“I don’t doubt that. Your mom seems like a good person.”
At the mention of her mom, a small smile lifts her lips. I bet she doesn’t realize she did that.
“So the fact that the corpses aren’t staying is bad for your family, huh?”
She nods. “Can we change the subject, please?” Her fingers trace the edge of her tray. “Where are you from?”
I pause. That’s a loaded question.
“Did you forget? You an Army brat that moves around or something?”
“Nah,” I shake my head. “I lived in Miami last.”
“You have brothers or sisters?”
A chill rushes down my back and I zip up my jacket. But the leather is no match for the demons crawling beneath my skin right now. This interaction, this conversation becomes an inquisition, a cross-examination as I sit here. The chill settles in my bones, aching. “Yeah,” I say in a cough. “But I haven’t seen them in a while.” Is that right? Did I?
“I’m sorry. You must miss them.” Her eyes look misty. She’s probably thinking of Ben, who’s somewhere on the campus alive. Her world is near perfect, yet she doesn’t see.
I exhale harder to push away the cold infecting my body, chilling my insides, and churning anger. “We can talk about your gift, if you want.”
“I already told you, this isn’t a gift,” she whispers.

And the recipe for Salisbury Steak.
Salisbury steak is a big favorite at my house. I’ve used several recipes over the years but this one continues to get rave reviews. I found it on AllRecipes.com a long time ago. 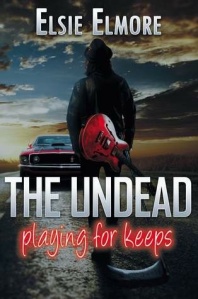 Interview with Elsie Elmore, author of The Undead: Playing for Keeps
What led you to write YA paranormal and corpses becoming reanimated?
Explaining my warped creative process is challenging because the stories I tend to create all begin with “What if?” That simple question can take me down a rabbit hole of possibilities and I never worry about whether an idea is plausible. In my mind, the boundary for reality is permeable.
The Undead started as a “what if” after a personal experience. The story then began to unfold in my mind, but it never ventured near The Walking Dead, which is a series I was addicted to once. I wanted the return to be less problematic and gory than the zombies in the apocalyptic stories.

Are the characters in The Undead based on real people?
Every character I create comes from bits and pieces of people that I’ve encountered, but no one person translates into a full character in one of my stories. At least not yet.

Is The Undead a series?
I wrote The Undead as a stand alone, although the door was left slightly ajar at the end. While Lyla, Eric and Ben’s tale could go on, it will be up to the reader to determine what happens next.

What’s your favorite genre to read?
I like so many different types of fiction. I have specific favorite books and favorite authors that span romance, action, drama, suspense, and memoir (and for adult, NA, and YA audiences).

This entry was posted in Authors To Keep In Your Sights and tagged YA Paranormal; Grim Reaper; Paranormal Romance; Elsie Elmore.

One thought on “Elsie Elmore’s The Undead: Playing for Keeps Blog Tour”

JM,
Thanks so much for hosting my release on your blog. I so appreciate ALL your help.
(And although the recipe is lobster-free, but it’s still very good.)
Looking forward to catching up with you.