When I was researching my book, The Secret Life of Concubines, I was interested in setting the story in a portion of Japan not as well known. I had seen the movie Silk, and my imagination was immediately captured by snow on pine. Hokkaido was that outpost that I chose to set my series. When I was looking around for inspiration for my daimyo-antagonist character, Matsumae couldn’t have been more perfect. 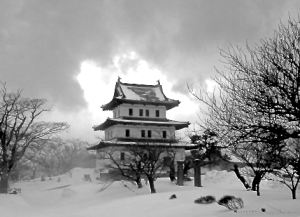 Though the character of Matsumae Yoshinobu is fictional, his backstory is one of rebellion and going it alone. The Matsumae ruled a portion of the island of Hokkaido, “Ezo” as it was known in the 1600s, and were given a unique fiefdom from the shogun. Most of the territory was wild, impenetrable forest. The native peoples called Ainu had settled it for years and were down as far as the Kuril Islands. The Ainu were tribesmen, completely different to the Japanese. They lived off the land, hunted and were considered unkempt and inferior. In exchange for protection of the northern borders against Russian and Ainu incursions, the daimyo were given a free hand. This was huge. It meant that the Matsumae didn’t have to travel every other year in a costly tribute journey like most other daimyo. They were left alone and they developed a thick skin. 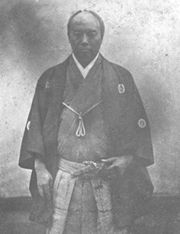 The life was hard. Rice didn’t grow, they had to import their rice because winters were long, and the Matsumae relied on trade with the Ainu, of which they ran several taikin outposts as they began to subject the native peoples. Historians have noted that Matsumae daimyo are weak, inconsequential and occupied an anomaly in Edo’s otherwise centralized system of daimyo management. The shogun needed them. He was across the Straits on another island, Honshu, and that made administration of the hinterlands difficult. The northern borders were extremely important especially when Russia began to make more trips into Japan, and by the 18h century, there was real fear that they meant something more sinister.

In 1792, a seminal voyage from the Russians convinced the Edo government that the Russians were up to no good, that they had reason to suspect conquest. A Russian ship led by an officer of Finnish-descent, Adam Laxman landed in Hakodate and wintered at Matsumae castle. They demanded trade, and needed supplies. They pulled out papers signed by their Empress giving them authority to offer trade with the shogun. They had Japanese castaways with them that had washed up on Russian shores. They wanted to return them as a sign of goodwill. Europe was in flux. The French Revoltion infected the Russian Empress with paranoia who suspected the castaways as spies, but that was beside the point. The Russians meant to leverage them. It was all for naught. What started as a “friendship mission” was viewed with disdain and hostility. The daimyo met with the Russian ship, but told them they were unwelcome to trade. He gave them a paper that said they should go to Nagasaki if they wished to return and one ship a year would be recognized. This paper has been debated for centuries. The truth is, the Japanese were really calling the Russians bluff, and didn’t expect they would return.

The trip was considered a disaster. The Russians lingered through a never-ending winter with meager supplies and no trade treaty, but as the first Russian voyage to step foot in Northern Japan, they were treated somewhat decently. They didn’t help themselves to the women of Matsumae, and they behaved when they were told to leave in spring. But the threat was there. It was real and the Matsumae daimyo performed a valuable service in keeping the Russian bear from marching on Edo.