Kyoto A City in Bloom

To my mind there is nothing so beautiful as the ancient city of Kyoto. The shogun had Edo, but Kyoto was fit for an emperor. 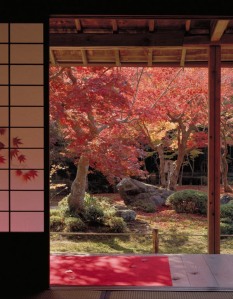 Kyoto is full of stories and ghosts. It has a dash for the dramatic too, with thousands of shrines and temples, it is the sacred heart of the country where a bloodied samurai once hid out in a cabin after an assassination attempt for his part in modernizing Japan.

One of the most famous shines is Fushimi Inari Shrine, a tantalizing spectacle for the eye you’ll want to get lost in. The shrine showcases thousands of jaw-dropping bright torii gates, you wind your way through to get to the shrine. This is one place where the journey really counts.

Kyoto is also home to Gion, the traditional Geiko district. If you hang out, or are lucky you might see the Geisha as she scoots to her engagements around the old city streets.

There are tourist traps in Kyoto like any other city, but if you want to mingle with real Geisha you’ll need to be invited to a prestigious tea house, and if you’re George Bush or a wealthy industrialist you might have a chance, though it won’t guarantee you entry. Yes, it’s that hard.

Fall is one of the best times to see Kyoto. The maple tree is well-cultivated and nothing is more breath-taking than seeing the fiery show of these beauties as they change with the seasons.

Autumn is also a great time to grab a sip of plum sake, and head for Gion for more Geisha-watching, because you’re not important enough to enter the tea house. 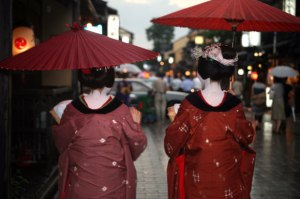 Shrines. Geisha. History and bloodied samurai. Yet, nothing says Kyoto like cherry blossoms. Hanami is the very best time to visit Kyoto.

You’ll see lots of Geisha if you go to Kyoto during cherry blossom season, so go and rejoice. Grab your camera, but keep a respectful distance. You’re in Kyoto and you’ll have to be happy with a look on the outside. If you’re David Bowie, you might get into the tea house.

This entry was posted in Geisha, Tayu; Oiran; Edo; Courtesan.